What is a tsunami?

The phenomenon we call tsunami is a series of large waves of extremely long wavelength and period usually generated by a violent, impulsive undersea disturbance or activity near the coast or in the ocean. When a sudden displacement of a large volume of water occurs, or if the sea floor is suddenly raised or dropped by an earthquake, big tsunami waves can be formed.  The waves travel out of the area of origin and can be extremely dangerous and damaging when they reach the shore.

The word tsunami (pronounced tsoo-nah’-mee) is composed of the Japanese words “tsu” (which means harbor) and “nami” (which means “wave”). Often the term, “seismic or tidal sea wave” is used to describe the same phenomenon, however the terms are misleading, because tsunami waves can be generated by other, non seismic disturbances such as volcanic eruptions or underwater landslides, and have physical characteristics different of tidal waves. The tsunami waves are completely unrelated to the astronomical tides – which are caused by the extraterrestrial, gravitational influences of the moon, sun, and the planets. Thus, the Japanese word “tsunami”, meaning “harbor wave” is the correct, official and all-inclusive term. It has been internationally adopted because it covers all forms of impulsive wave generation.

Tsunami waves often look like walls of water and can attack the shoreline and be dangerous for hours, with waves coming every 5 to 60 minutes. The first wave may not be the largest, and often it is the 2nd, 3rd, 4th or even later waves that are the biggest. After one wave inundates, or floods inland, it recedes seaward often as far as a person can see so the seafloor is exposed. The next wave then rushes ashore within minutes and carries with it many floating debris that were destroyed by previous waves. When waves enter harbors, very strong and dangerous water currents are generated that can easily break ship moorings, and bores that travel far inland can be formed when tsunamis enter rivers or other waterway channels. 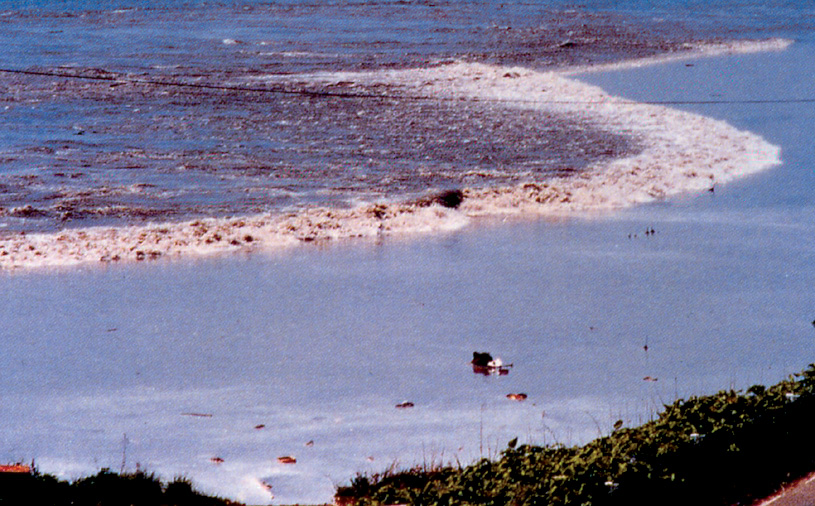 Tsunamis can be hundreds of feet tall, and they travel very fast. This means they can be dangerous even for people who aren’t on the beach. Tsunamis can be extremely destructive and can knock down whole buildings.

But not all earthquakes or volcanic eruptions cause tsunamis. Whether a tsunami forms can depend on a lot of things. The shape of the ocean floor can determine if a tsunami happens. So can the distance and direction of the earthquake.

If there’s a chance a tsunami is on its way, you don’t want to be near the coast. So how can we tell if a tsunami is coming? We use satellites! 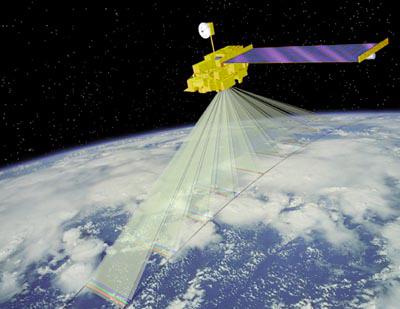 MISR (the Multi-angle Imaging SpectroRadiometer) is a NASA tool that watches for tsunamis from space. It has nine cameras, all pointed in slightly different directions. As the satellite passes overhead, it takes nine pictures of the same spot from different angles.

MISR can see sunlight reflecting off ripples and waves. Satellites that look straight down cannot see these ripples.

This series of MISR pictures was taken over six minutes on December 26, 2004. It shows tsunami waves breaking on the southeast coastline of India. Credit: NASA/GSFC/LaRC/JPL, MISR Team

These images help scientists understand how tsunamis work. The more we learn about tsunamis, the better we can predict where, when and how strong a tsunami will be. That way, people can have enough warning to get away and stay safe.